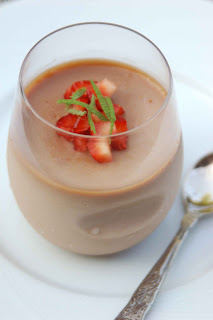 Let's get this straight right up front: If you can boil water, you can make panna cotta.  Frankly, it's one of those recipes everyone—dad's included—should have in their little kitchen toolbox.  It's so easy, so versatile, and it can be made way ahead.  And it looks elegant too.

For this video, I serve them in one of my favorite new products, Govino wine glasses.  These super-cool, BPA-free plastic wine glasses are a great alternative to ramekins, and allow you to enjoy the dessert pool-side, at the park, you name it.

Make this delicious dessert up to 2 days ahead.  If you don’t have ramekins or are looking for another serving idea, try serving directly your favorite glasses—whether wine, margarita, Champagne, or otherwise.  Just remember to bring cream mixture to room temperature before adding to glasses.  Also, this recipe can be easily halved of fewer servings.
2 Tbsp. melted butter
2 envelopes unflavored gelatin
1/2 cup milk
5 1/4 cups heavy cream
1/4 to 1/3 cup strong brewed coffee
1 cup sugar
2 tsp. unsweetened cocoa powder
1/8 tsp. ground cinnamon
2 Tbsp. finely chopped semisweet chocolate
Pinch of Kosher salt
Garnish: chopped strawberries, fresh mint leaves, chocolate shavings
Brush 10 (1/2 cup) ramekins with melted butter and transfer to a large roasting pan.  In a small bowl, whisk the gelatin into the milk and let stand until softened, about 5 minutes.
In a medium saucepan, combine heavy cream, coffee, and sugar just to a boil over medium heat.  Remove from heat and whisk in the cinnamon and cocoa.  Whisk in the gelatin mixture until completely melted, then add chopped chocolate and stir until melted.  Strain the mixture into a large bowl; let cool to room temperature.
Pour mixture into ramekins and refrigerate until firm, at least 4 hours or overnight.
To serve them out of the ramekins: dip bottom of each ramekin in hot water for 30 seconds.  Run a knife around each panna cotta and invert it onto a dessert plate.  Lift off the ramekin.  Garnish, if desired.

"I'm not exactly sure," I yelled downstairs.  Fact is, I was hurriedly typing into the Google search window hoping an answer popped up before my wife, who was ascending the staircase, and I made eye contact.  (Hey, when it comes to food, I do not like getting caught flat-footed in front of my family.)  But I was busted.  I didn't know a spurtle from a spurge.  So my wife and I searched together, and here's what we found on Wikipedia:

The spurtle (or "spirtle") is a Scots kitchen tool (about 11-inch long), dating from at least the fifteenth century. It was originally a flat, wooden, spatula-like utensil, used for flipping oatcakes on a hot griddle.

Over time, the original implement changed shape and began being used specifically for stirring oatmeal and soups. The rod-like shape is designed for constant stirring which prevents the porridge from congealing and so becoming lumpy and unappetising.[1] It looks like a fat wooden dowel, often with a contoured end to give the user a better grip.

The Annual Golden Spurtle World Porridge-Making Championship, held in Carrbridge each year, invites porridge-makers from across the globe to compete for the "Golden Spurtle".


Yep, I was about to throw my recipe into the mix for a chance to bring home the 2011 "Golden Spurtle."  Quick fact: I'm a pretty fanatical oatmeal fan.  Whether rolled, stone-ground, or steel-cut, I know my way around an oat.  I eat 'em sweet or savory—morning, noon, or night—makes no difference to me.

So when I saw that Bob's Red Mill was holding a "Spar for the Spurtle" contest, I had to get in on the action. The grand prize is the opportunity to compete in this year's Golden Spurtle World Porridge-Making Championship in Scotland.

I wanted to keep it savory and Southern, so I went with a Southern spin on shrimp and grits using steel-cut oats in place of stone-ground grits. One taste and y'all will see that the Southern elements in my recipe—andouille sausage, fresh Gulf shrimp, and hot sauce—blend and harmonize perfectly with this cheesy, kicked-up "porridge."

One of the contest requirements was to create a 3-minute video of the recipe...so I did my best, wearing my Billy Reid "Make Cornbread Not War" T-shirt for inspiration. 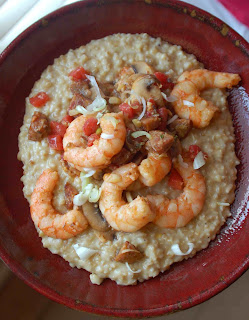 Cook sausage in hot oil in a large skillet 5 to 7 minutes or until crisp.  Drain on paper towels, reserving drippings in skillet.  Set sausage aside.

I'm Scott Jones—a very hungry food dude in every sense of the phrase. My mom and kids (and a few of my friends) think I'm a chef and nationally recognized food and wine expert. Most folks know me as the former Executive Food Editor of Southern Living (1999-2010), and current President of JONES IS HUNGRY, a culinary media company.

These days, when I'm not wearing my "daddy blogger" hat, I'm focused on food, wine, and culinary travel writing; recipe and menu development; television production; and culinary education. And, of course, sharing my food and wine experiences—from high to low—here on the JONES IS HUNGRY blog. I also write a monthly wine column for Cooking Light called "10-Minute Wine Matchmaker."

Quick backstory: I left a career in Hollywood back in the late '90s to pursue my love of food and wine. In doing so, I attended The Culinary Institute of America. I also have a Magazine Publishing degree from the University of Mississippi. I'm a member of the Southern Foodways Alliance and a judge for the James Beard Foundation Awards.

My kids want me to mention that I've been featured on dozens of TV shows, from Paula's Home Cooking to Food Network Challenge, and I'm the author of the Southern Living Wine Guide and Journal.

I call Birmingham (AL) home, where I'm on a quest to qualify for the Boston Marathon.